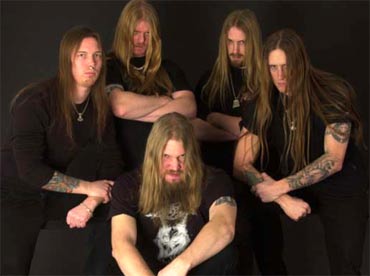 Amon Amarth wages an endless crusade against everything that sucks. Constantly touring and grinding out those catchy riffs, they’re as mainstream as extreme metal gets. Albums like Versus the World and Twilight of the Thunder Gods are the apex of melodic death, with bleeding guitars of tunefully wanton destruction.

Now, after decades of sticking to their guns, the band says they’re switching things up. They’re making a concept album about vikings.

For those of you not in the loop, literally all of Amon Amarth’s songs are about vikings. Being vikings, praising vikings, killing other vikings, you name it, they’ve already wrote forty songs about it.

Then it hit me once I put Jomsviking on. Concept album is another term for taking crappy risks that won’t pay off.

Thankfully, the risks are all slight changes in vocal presentation, mostly involving random spoken monologues. “Wanderer” ends with a voice-over wrenched straight from the Grinch cartoon. The diatribe at the beginning of “Vengeance Is My Name” sounds like GWAR-style self-parody. Even worse is a much bigger change: the awful vibrato-inflected female vocals in “A Dream That Cannot Be”. This woman sounds better suited for back-up vocals on a jock jam compilation that comes with your paid six month subscription to Entertainment Weekly.

Slight vocal missteps aside, Amon Amarth remains Amon Amarth. This is their best set in almost a decade, and even though there are no stand out tracks, I still felt like I was on a grand quest to desecrate my foes’ lands, smite them all, and collect their skulls in offering to Odin. Once Amon Amarth and I pass through the gates of Asgard’s golden hall, we will drink and toast to this album, shrugging off the stupid female vocals with a laugh and boasting about all the muscular melodies.