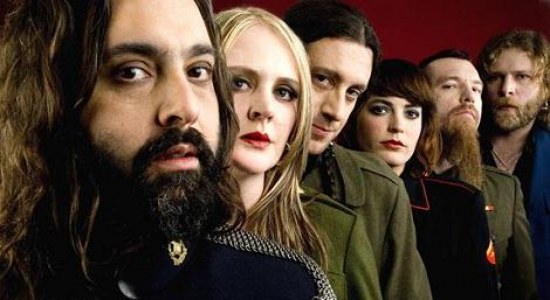 Decades and albums later, Hammers of Misfortune still sound like they’re trying to nail a sound down. It sounded like they were on the brink of a stylistic breakthrough with their previous album, 2011’s wacky prog-metal/folk/whatever 17th Street. Every track had a unique sound that still lent itself to a cohesive style, an approach that Dead Revolution drops without any fanfare.

While the organs and crazy harmony antics are still there, they’re buried under a much more traditional classic metal facade. Of course, this isn’t a bad thing at all: “The Velvet Inquisition”, “Dead Revolution”, and “Flying Alone” are all great tracks. Fast, infused almost purely with a NWOBHM focus on tight speed, melody, and rhythm, newcomers to the band will instantly fall in love.

But honestly, old fans SHOULD be disappointed. While partially a return to the more conventional metal styling of some earlier releases, it’s a cheap ploy for metalhead appeal. 17th Street had a lot of bad songs, but they were all over the place: it was a cool and weird combination of Iron Maiden, Queen, Pink Floyd, and everything in between. Even the longer tracks like “The Precipice” and “Here Comes The Sky” stick very close to traditional metal. Now almost purely Maiden style, the band probably uncovered that’s it’s just easier to make straight ahead metal not suck and sacrificed their sprawling sound out of pure laziness.

As if to make up for how awesome and not progressive the first six tracks are, the last track is a ridiculous rendition of the folk song “Days of ’49”. It’s slow, stupid, and Bob Dylan’s version sucked too.

Last track excluded, go listen to Dead Revolution and enjoy the tasty riffs and great harmonies. I’m going to go sit in a corner and whine about how too many bands are defaulting on NWOBHM stylings and not even trying to come up with anything new.