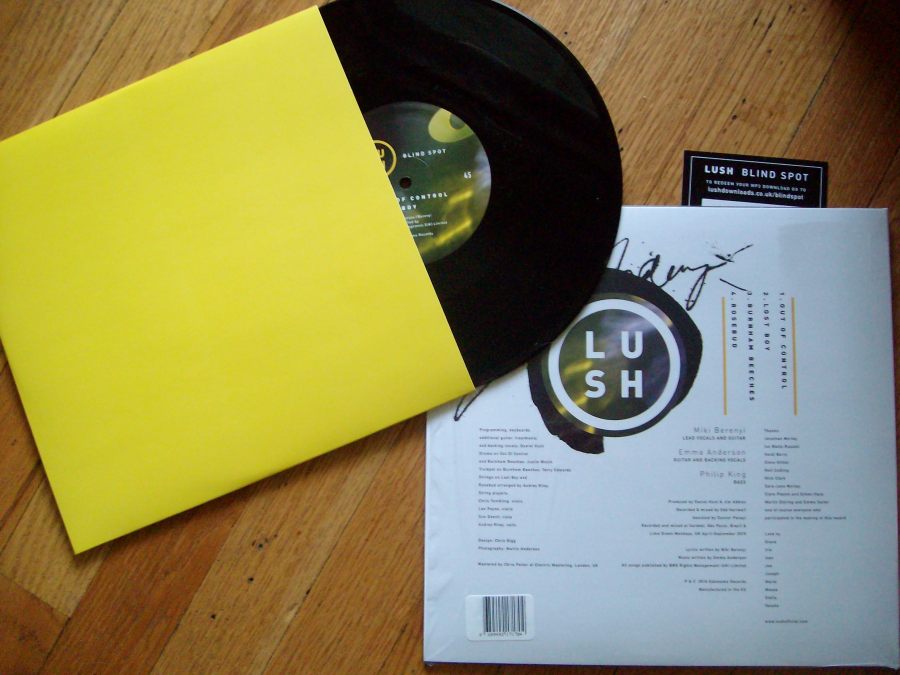 The band Lush released a new EP last month after a 17 year break-up. The album was available for pre-order from the mailing list for an expected delivery date of the first week in April. I thought about it, but decided I would just pick it up for list price on free record store day. Much to my surprise but not to anyone else, Blind Spot sold out everywhere immediately, because each record store probably ordered 2 copies. I did find a warehouse in the UK who did have it in stock and would ship it to me if I wanted. I decided to bide my time with a local shop and requested to be put on the wait list. I was then called back today, almost two months after I would have gotten it if I had spent an extra five dollars and pre-ordered it.

I had decided not to listen to it until I heard the physical recording. I had already heard track one, “Out of Control,” and was excited to hear the rest.

As expected, the previously released “Out of Control,” along with a music video, does represent the most this EP contains. Sure, there are some interesting attempts at new material, however, I feel as if Berenyi and Anderson might be out of practice. The EP sounds old, as if it could have come out 20 years ago and been a flop like some of their other singles.

Of the other three tracks, none of them sound bad, but feel like a wrestling with imagery. There is no clear direction of the music, no light. Each track features classic Lush guitar sounds and orchestration but nothing fresh or desirable. Track two, “Lost Boy” is very lost sounding, but that is not a compliment. The guitar starts out as the focus, but there is so much extra movement and sounds it becomes quickly difficult to enjoy. I imagine this one would make a good music video, since it is very atmospheric, but too much half way to rock to be entertaining or danceable.

“Burnham Beeches” at least features a great example of the poppy shoegaze rock that Lush was well known for on Lovelife, which, side-note, might be my new favorite Lush album, making me a traitor to Lush snobs everywhere. This track features a great trumpet in the background and does not sound as dated as the rest of the material.

“Rosebud,” the last track on the album, seems to be the biggest attempt at a reinvention, but also feels like almost giving up. Even the vocals feel light and void of lift.

I will still see the band in September. I am sure they will play “Out of Control,” however this EP sounds more like a reunion tour release and not a musical leap. Maybe that is what happens when you break up for a couple of decades.