YOUNG AND OLD PROMISE EARTH TO KEEP IT REAL 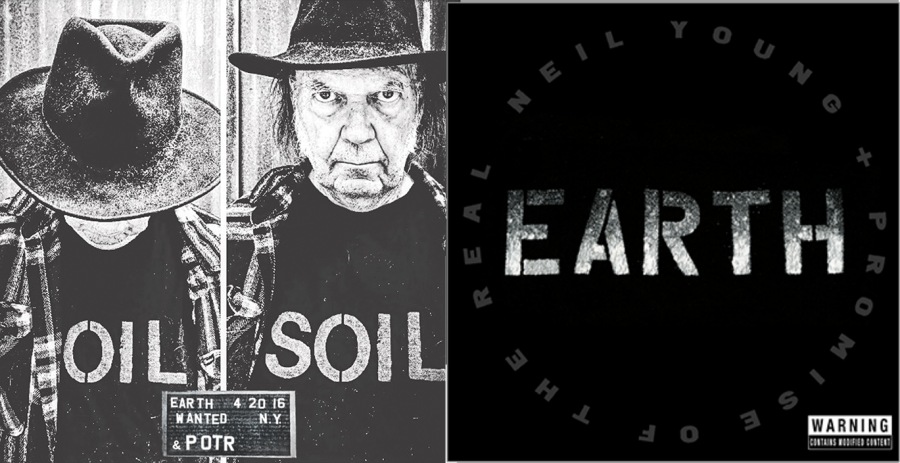 Neil Young and Promise of the Real – Earth

Do you love classic rock? Do you love the earth? Do you love listening to bees suddenly buzzing in your ear? Do you want to hear Neil Young sing “GMO” auto-tuned? If you answered yes to any of these questions then Earth is the release for you. Ecological propaganda and synchronized animal sounds are richly dotting this two disc release. The smooth groove of Promise of the Real blends perfectly with the crows cawing artistically throughout the entire set.

This is a recording of live performances from last year, 2015. The majority of the instrumentation is excellent. Some of the guitar solos are odd and might be trying real hard to be dirty, that or Young was busy wrestling the guitar out of the hands of Promise’s frontman and son of Willie Nelson, Lukas. The result is some dirty guitar solos.

Most of the songs were selected for their message. Any tree-hugger will feel right at home listening to lyrics about sucking the oil out of the earth and the personification of nature as a feminine figure, if referring to concepts of energy as a mother are still socially acceptable. Most of the songs are rock songs, and Promise of the Real might be called Promise you won’t fall asleep until the ballad. Thank gaia Young’s voice is as warbley as the nearly extinct kirtland warbler and will keep you awake to hear the second disc.

Before we go any further, let us take a moment to reflect on the real messages here. Neil Young has been making music since he was 15 and probably earlier. He was popular over 50 years ago, already recognized as one of the most influential song writers of the era. This release contains many songs about a lost time. Neil Young may have felt his beloved Canada fading in the sixties as much as one might look at the time Young came from as the golden years of song writing and positive messages.

The truth is Young is one face in a crowd. In the sixties the majority of mainstream music sucked as much as it does now. The only real difference is any real artistic development risks being permanently lost in a sea of similar attempts struggling to stay afloat as the media machine churns the surface of the torrid black waters with bigger and bigger whirlpools. The momentum generated during the post WWII years floats larger and larger garbage heaps full of plastic-y waste aka top 40 million. Everyone makes music now. People who would have never touched a physical musical instrument pound old and used tunes until the curds of fetid death spurt out of a churn and right onto the billboard.

Young and Promise’s new release is very modern. It covers many current trends. Like our attempt at repopulating the kirtland warbler, who can decide if we should try to become a people who restlessly attempt to preserve the classics or pioneer forward until everything is used up? Tongue in cheek, Neil Young, his cow sounds, Promise of the Real, the honking of cars, the backup singers, and the repressive crows think “People Want to Hear About Love, ’cause it will make them feel alright.”