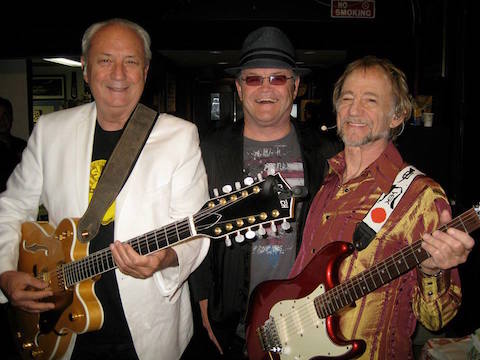 ’60s bubblegum rock holds a special place in my heart. Never again would rock raunch and Sesame Street melodies meld so seamlessly, selling sex and drugs to minors. While the Archies’ “Sugar Sugar” is an obvious example, my personal favorite is “1 2 3 Red Light” by the 1910 Fruitgum Company. The obligatory infectious melody is paired with lyrics that are decidedly anti-”just say no”: “Everytime I make a move to love you/1, 2, 3, red light! You stop me/Baby you ain’t right to stop me”. In general, there’s always something rude about the purest bubblegum, a tension bubbling under the surface that will always make Everything’s Archie infinitely cooler than Meet the Beatles.

Most of these groups were manufactured by evil corporations and the Monkees were no different, but somehow they’re back fifty years later with Good Times!, a retro bubblegum piece here to revive your love of ’60s radio-ready pop. Of all the bubblegum acts, the Monkees were the only one who actually had a consistent line-up. This was not by choice: the group had to be on their popular TV show every week and pretend they were a functioning unit. The members rarely wrote a track and often used a ton of session musicians even after they wrangled creative control of their albums.

And they’re still doing it fifty years later. Now slimmed down to official members Michael Nesmith, Peter Tork, and Micky Dolenz, it’s all studio glitz. Many songs have ten session musicians backing Micky Dolenz, with Nesmith and Tork taking over only a handful of the albums thirteen tracks.

Each Monkee has one writing credit to their name and they all totally blow. Tork’s “Little Girl” and Nesmith’s “I Know What I Know” are ballad drivel, while Dolenz’s “I Was There (And I’m Told I Had a Good Time)” is the worst “Why Don’t We Do It in the Road” re-write ever.

Other songwriters do a better job, but not much. The opening title track is based on a Harry Nillson demo and even features the dead man’s voice, an addition that doesn’t keep the song from sucking ass. “You Bring the Summer” is a standout, written by the dude from XTC. It’s glittery ’60s bounce trumps “She Makes Me Laugh”, a soft verse/loud chorus piece by some dude from Weezer.

There’s a lot of middling tracks in between and the okay rocker “Gotta Give It Time”, but “Love to Love” definitely sticks out. A Neil Diamond track with ancient vocals from the departed Davy Jones, it’s garage-pop aged to perfection. The guitars jangle and the tambourines pound proudly as Jones sings with the perfect moody croon. Too bad it’s the only great song on the album, and it’s only appropriate that it was mainly recorded back in ’67.

So yeah, these are some shitty times. More of the Monkees or Headquarters were okay albums, but both are twenty times better than this garbage. I’d probably rather listen to Meet the Beatles than this…and I fucking hate the Beatles.

DIALOGUE: WYTCH HAZEL IS A PRELUDE TO WHAT? NO SURPRISE: THE WINSTONS PRODUCE PROGRESSIVE PSYCHEDELIC ROCK FROM ITALY